Who Killed the Software Engineer? ()

The future of mobile computing

What a difference a decade makes. Nowadays, most businesses don't think twice about purchasing a laptop rather than a desktop PC unless the worker is truly deskbound. This is increasingly becoming the trend with consumers / home markets.

But laptops are facing an ever increasing threat from the PDA and Smart phones. These handheld devices are becoming closer to being a complete business device than you might think. 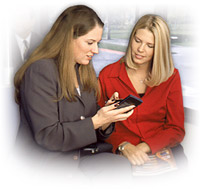 The key factors for laptops have been size, weight, keyboard and screen size. The same it true for the handheld devices.

The crux is that Users are starting to realise how much can be done with a screen the size of a business card or two. The excitement and uptake generated by RIM's Blackberry devices have opened the door to other technologies and the eyes of IT world.

Handhelds have never been able to match the shear processing power of the notebook, but the fact of the matter is that the average User doesn't need a several-Gigahertz unit to use their email.

The thing we must keep an eye on is the specification of these emerging handheld devices, 800 MHz processor and 128Mb of RAM is not uncommon which is roughly the spec of laptop devices 6 years ago. When you take into account the inclusion of wireless networking and full-size keyboard options, it is becoming easier to see the lure.

Where the screen size is concerned, the smaller the size doesn't mean less functionality. The displays of handheld devices are indeed small and a much lower resolution than laptops, yet you can still use them for reading simple spreadsheets and documents including pictures.

With the ever growing number of WiFi hotspots these wireless enabled handheld devices allow the business user to keep in greater contact with the office whilst on the road.

Ultimately, this will mean we will increasingly see people sipping coffee with one hand while surfing the Internet with the other.

Even though the handheld transferral is in the early stages, it is evident that there is a general shift towards greater mobility. Over the next decade we may see the same the PDA / Smartphone replacing the standard PC device.